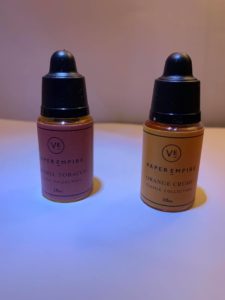 What’s up vapesters! Today’s review is of a premium vape liquid, Caramel Tobacco by Vaper Empire. This is not your typical tobacco e-liquid so I wanted to let you all know about it just in case you’re looking for something sweeter than the standard tobacco e-juice you’re accustomed to.

Vaper Empire is a well-known brand in Australia and New Zealand that’s famous for its premium e-liquids. They have two collections, Classic and Artisan, and this one is from their Classic collection. While it comes in two different bottle sizes, it can also be purchased in prefilled e-cigarette cartridges for Vaper Empire’s V-Pack II (cig-a-like) and their Viggo Series (pod vape).

With the success of their other tobacco e-liquids, Vaper Empire decided to release Caramel Tobacco, a new flavor that they had been perfecting for some time.

Vaper Empire has a lot of flavors of vape juice, like cherry, watermelon, blueberry, apple, tobacco ry4, and a whole bunch of others. They even have some flavors that you have probably never heard of like The Amazonian and Ragtime Raconteur, which are part of their Artisan collection.

Caramel Tobacco e-liquid is an absolutely fantastic juice for new vapers that have just switched over from smoking and aren’t satisfied with the usual tobacco juices. It’s sweeter thanks to the light touch of caramel that sets it apart. It has a warm feel to it, reminiscent of smoking but a whole lot better.

The bottle design has a simple but classy look to it. It’s not all hype like a lot of e-juices out there. It just has that simplicity that makes you think you’ve found something worthwhile. Crack open the bottle and your nose will quickly confirm that you have found a juice worth vaping.

If you are one of the many who like tobacco juices, this is one you don’t want to ignore. It has that rich tobacco taste but with enough sweet caramel to make it taste like a dessert e-liquid when you vape it. But not too much caramel, just enough to make it taste great. It’s the type of flavor that you can vape all day, not just on special occasions. 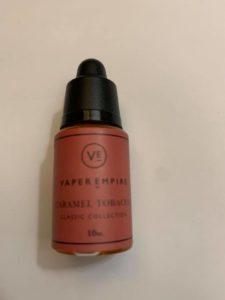 We all know vaping is a lot better than smoking but switching from cigs to vapes can be really tough. This Caramel Tobacco e-juice from Vaper Empire makes it easier as it takes the tobacco flavor right out of cigarettes and puts it in a bottle of e-juice while adding just the right amount of caramel to sweeten things up and make it better than the original.

The throat hit is perfect, just enough sensation to feel like you’re inhaling something while you’re vaping it but not so much that you feel overwhelmed.

This is an all-around good juice for new vapers and anyone who likes sweet vape liquids and tobacco flavors.