Geekvape Aegis X box mod is one of great dual-18650 mod from popular vape manufacturer Geekvape. It is rated for 220 watts, and it is powered by the updated AS 2.0 chip-set. An impressive 2.4 inch color display on one side, and flip it round and you get the typical Aegis design we’ve all become accustomed to. Along with all those fancy features, it’s also in keeping with its predecessors. An IP67 certification for water proof and dust proof rating, thick rubbery finish and that squidgy leather on one end.

Geekvape has a proven track record in mod manufacturing. The Aegis series has become very popular for being rugged and reliable. The company has quietly become one of the top mod makers in vaping, so let’s see if the Aegis X can live up to the expectations. 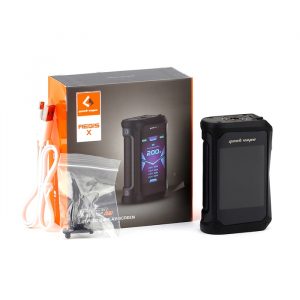 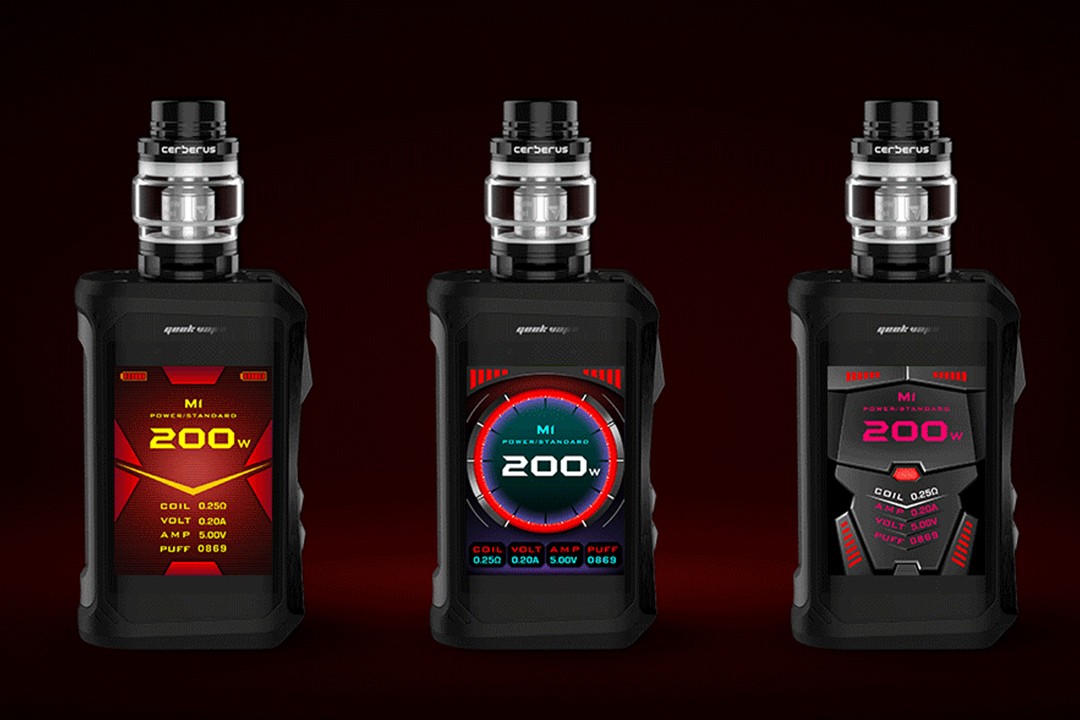 When I saw the design immediately liked it. Their design will catch your eyes with its modern and exciting design. Also the “leather” on this one isn’t leather but a soft cloth that looks and feels great. It’s designed very similar to the Aegis Legend, with the main difference being the massive 2.4-inch OLED color screen on the side. Overall, if you ever used an Aegis mod before you’ll know what to expect here.

There are two different packages. a package for consumers which is different than the one some reviewers got. So, here we will review the consumer version as I listed its content above which I have.

With regards to the screen, it’s one of the largest, clearest, brightest screens I’ve used. Coming with different color modes, different themes but there is no color blind feature which I was hoping to be included. but on the other hand, everything is large and clear and that’s what makes the Aegis X stand out in comparison to the majority of mods that hit the market.

The Aegis X is a solid, nicely built and well-designed mod. It has the same tactical looks as the rest of the line. It is a little lighter than the Aegis Legend and feels great in the hand. Its size is average for a dual-18650 mod, pretty much the same as the Aegis Legend. The mod features a massive 2.4-inch OLED color screen that nearly covers the entire side of the mod and is very clear and bright.

Like all Aegis mods, the mod itself is mostly black and has a thick rubber coating that covers most of it. The color option itself is only an accent panel around the side of the mod and the color of the soft, cloth-like material that touches the palm. Branding is kept simple. There is a Geekvape logo above the screen and an Aegis one in white just below the adjustment buttons. Nothing over the top. 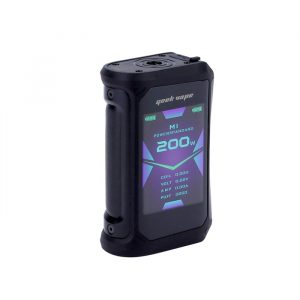 The sliding latch battery door is same as in the Aegis Legend. Once the batteries are in you have to jam it shut, making sure the latch is secure. Not a big fan of it personally, but it’s better than having doors to unscrew. Since it’s an IP67-rated mod, they can’t do the magnetic side door, so this design makes sense. Very heavily insulated dual battery on the door itself. It is a little difficult to see the positive and negative signs. No space between the actual clip mechanism itself and the base which is good.

Top of the mod

There is no button rattle on this mod at all either. The 510 pin is great and gave me no issues with any atomizer. It is centered and the rubber part bevels up a little. The mod itself is 31.5 mm thick, but it can fit up to 26 mm, 26.5 atomizer without overhang due to the bevel. Even more you can use 28 mm atomizer and it will work fine for you. But the slight overhang is barely visible. 30 mm will not be fit there.

They list 2-amp charging on this mod and while I don’t recommend charging mods internally. I found the max charge rate to be 2.05 amps, so that’s a great rating. But still, I strongly recommend you remove the batteries, and use en external charger.  Because if you left it through night it is going to be running a consistent current regardless of the cutoff through that chip itself. The USB port is next to the 510 connection and it is protected by a rubber plug. You can charge the device via the Micro USB port with a 5V/2A charge. However, if you get really stuck, its nice to have the option there and make sure its on a fire-proof surface. Sounds petty but safe to be safe.

Tip: Don’t use micro USB through night to charge your products.

Like any mod, the battery life purely depends on: (Batteries being Used, resistance of the coils, wattage we are vaping at). I’ve had no problem getting a full days life out of my batteries when vaping at 75 watts. So its comparable to many other mods I use daily at around the same wattage. Insulation on the inside to protect batteries which is very good.

This is super clever, with the ABB option activated, when one of the batteries running out. another battery will charge it till the electric getting balanced. Yes it can take some time, but effectively what it’s doing is taking charge out of the more full battery, and leveling the charge levels out.

The Aegis X has done something remarkable here by self-balancing the batteries which may help increase the life of your batteries long term.

The Aegis X is packed with features and modes like most of Geekvape’s mods. You have Power mode with Soft, Normal and Powerful preheat options (which is a new feature on their mods), Temp Control (SS, Ni200, Ti, and TCR), Watt Curve mode (VPC), and Bypass mode. It uses a standard TCR as well, which is fully adjustable in TCR mode but not adjustable in the presets. It has pretty much every mode a vapor would need without being overbearing. Its buttons are clicky.

The main difference and also great feature between the X and the other Aegis mods though is that it uses profile memory slots that you can program and switch on the fly. So, instead of having to change a bunch of settings, you will be able to just switch the profile. That’s quite a nice feature, especially if you like vaping in a variety of modes. 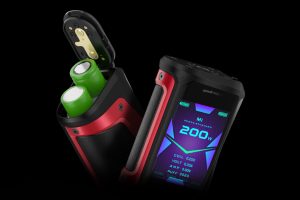 But let’s get things straight – The Geekvape Aegis X is the best of the Aegis line in my opinion. It has everything the Aegis Legend had, but with a beautiful bright screen. If you’re looking at the amazing line of Aegis Mods, don’t mess around and go straight to the top.Its function, style and day to day uses far out-weigh every other Aegis mod available. With this performance while vaping and using it, It is obvious how this mod going to the top among others. 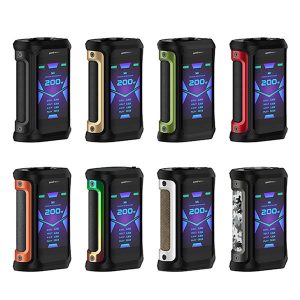