Blvk unicorn and those in charge of its work seek to search for what is new in order to impress its users. And this time it has done something new, which is the lychee nicotine salt by blvk unicorn.

A brief summary of the lychee fruit is a tropical fruit native to southern china and it is said that it is an ancient fruit that existed 2000 years BC. This fruit also exists and grows in various places in the continent of Asia, America and Australia. Also, the fruit consists of a hard husk like this one found in pistachios. its peel is easy to peel and edible pulp is white in color around a seed. The pulp is similar to grape pulp in taste and texture. And we will do a review on the taste of lychee nicotine salt by blvk union.

What blvk union and those in charge of working with it have done in choosing the taste of the lychee fruit is a good innovation. Which in turn leads to gaining users to experience the taste of thi fruit in the salt nicotine, which is mixed with cold menthol.

If you taste the lychee fruit from the blvk union. You will feel satisfied and rejuvenated for the users of salt nicotine. Because, you will taste the beautiful lychee fruit mixed with cold menthol, which makes you taste the cold lychee fruit and feel the taste of menthol in the exhale. But for me, as I was the first time I tasted the lychee fruit in salt nicotine. I found the taste beautiful and distinctive, but I felt that the taste of menthol was remarkably apparent, unlike its taste in the salty nicotine of apples by blvk union. As I noticed that it was somewhat simple in apples than in the fruit of lychee.

The e-juice bottle is good, simple and elegant.

Warning: This product is not meant for use in devices that reach sub-ohm resistance. We recommend this liquid to be used in pod-based, closed systems devices, and ultra low-output atomizers/mods. Every salt-based nicotine e-juice contains significantly higher levels of nicotine per millilitre, optimal for beginners or experienced vapers looking for a travel-friendly experience. 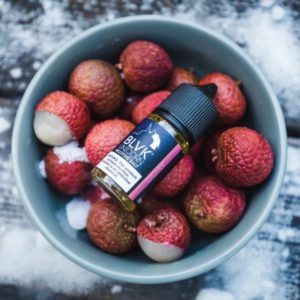 Finally, we conclude from the above that the lychee nicotine salt by blvk union has a 30ml. bottle. It has the beautiful taste of the lychee fruit which is mixed with cold menthol. Which makes you feel that you are eating the lychee fruit cold. Also, the menthol taste of it you feel a lot in the process of exhaling.

Likewise, it can be seen that the blvk union company and those working in it care about the users and their customers and seek to introduce new flavors as well as to mix flavors. And this has been noticed in salt nicotine, and they tend to be simple in mixing flavors to some extent. Which means that they do not tend to mix flavors that make you unable to distinguish between flavors due to their multiplicity, and their incompatibility.