Here we are, another upgraded version of tank which is Hellvape Dead Rabbit V2 RTA the upgraded version of original Dead Rabbit RTA. They released the new version by last June of 2020, another upgrade for an cool tank. When they spread the word about releasing a new version that is makes me thinking about real upgrades that will make a whole difference. Well, it is not gonna happen at this case. Here, we get small differences that will not make a huge impact to the tank.

Today, we are going to cut the pieces and get the whole thing. Sharing our point of view about the new version itself. Also, we are considering new vapors who getting new to this world seeking for a very and an amazing device. So, let us begin reviewing this new device and discover all aspects about it folks. 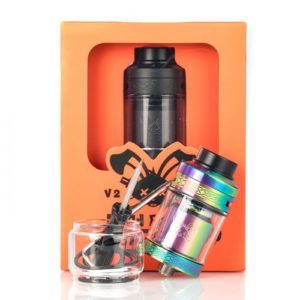 Hellvape dead rabbit v2 rta comes with different color options which makes a nice variety to us as vapors. I liked their outside design classy and defined. 25 mm diameter is pretty much a good thing, I got also 2 ml and 5 ml capacity which is good. From inside, we got “Y” Style “ear rabbit” deck which we will talk about later in details. Refilling from the top by moving the cover aside, good. Finally, a PC thermal insulation plate to prevent the heat between the tank and the mod. These are quick notes about the tank to get us more close to the dead rabbit v2 rta.

We are going to divide the tank to 8 parts and they are:

In their design they tried to make upgrade which deliver the result they want by creating a good airflow. Air coming from outside only from the top entering inside moving to the center of the deck moving up to the top drip.

It was a disappointing one, with putting a powerful e-liquid. Though, I did not get the whole flavor out. I was expecting more than this. According to what they say and the new design. Their new build can not help with that.

Finally, we come to the end. Rating my experience with the hellvape dead rabbit v2 rta and making all things clear and obvious. The machining and build quality are top notch, and this is a tank that will look beautiful on almost any mod. I think they did not make too much updates on this one than the version one. Their changes and updates make no big difference than the original one. Also, the flavor not coming all. In other words, if you have the version one stick with it, you will not get a big difference. If you’ve never had a Dead Rabbit RTA, this version we can say it will be a good start.